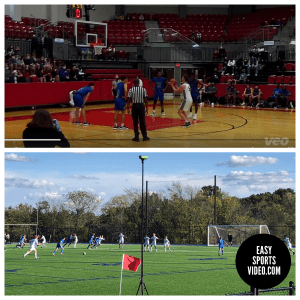 Recording your high school soccer games or basketball tournament with Veo is a great way to give the coaches footage to review with the team and also give the players highlight clips of the game.

As a coach or athletic director you probably want to know how to get a Veo camera discount so you can record your athletes at the lowest cost to the school. We hear from lots of high school coaches asking about the best soccer cameras and how to save money on the equipment.

One of the things that makes high school teams unique, compared to a soccer club teams that play year round, is that high school teams only need to record for a few months out of the year. Another difference is that many competitive soccer or basketball teams build the costs of video technology into the club fees but high school teams are having to juggle funding with all the budget needs of the school or boosters.

So I put together a summary of all the emails we’ve exchanged with high school coaches the last few weeks about the best way to afford a Veo camera. Below are three options we’ve shared for high school teams that want to record their soccer matches or basketball games with Veo in a 3-4 month season.

Here’s a summary of the pros and cons of each approach. We’ll go more into the detail of each below.

Pros:
– Cheaper than the newest camera model – You’ll spend less on an older model Veo than the latest model
– Camera delivered sooner – Shipping time from a team in the States is faster than delivery time from Veo HQ in Europe

Pros:
– Latest tech – Veo 2 stores more games, can charge while recording, better audio, and can livestream
– Tripod – Veo includes shipping cost when you buy a tripod with the camera in the U.S. Most teams selling a used Veo charge for shipping tripod, or keep it for their own new Veo

Cons:
– Highest cost option – Latest tech comes with the highest price tag
– Longer delivery – If you need it in a hurry the time to build and ship from Copenhagen might put you past season start

Pros:
– Lower total cost – Cheaper than purchasing your own camera
– Equipment trial – Good opportunity to demo & pitch camera to the school for the next year

Cons:
– No camera – At the end of the season you don’t have a camera for the next year

Below are some of the details I’ve discussed with high school coaches over the last few weeks. Every program is different in terms of needs and budget but I have noticed one thing in common with most high school coaches. You  typically need as much info and as many options as possible to present to your school or athletic director so hopefully these options help give you some choices.

I’m not going to reference numbers here for used or new Veo cameras since they can change over time and I don’t want them to be out of date.

If you only need to record a 3 month season it would make the most sense financially to do a monthly plan. If you do the Team plan for one month with Veo Analytics (which I recommend, our cameras have Analytics) its about $190 a month.

If you purchase through Veo you can order a Veo 2 camera for $1000, with our discount it would be $800. The way you get the discount code is you enter your name and email on this Veo discount page.

You’ll be sent a discount code you can use when you check out to save you $200 on the camera. This video shows you how to get the discount.

Although if you’re doing livestream there is an additional fee per month. So if you’re livestreaming for a few months it might be cheaper in total to do the 1 month plan and have it renew each month for 4 months. 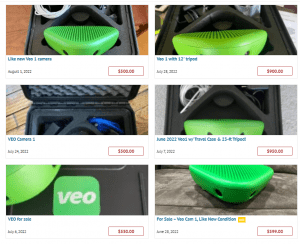 There are a lot of teams that are looking to sell their older model Veo cameras. We spent a lot of time last year connecting teams that were buying and selling and were becoming a bottleneck so we setup this page where teams can buy and sell used Veo cameras.

The plan cost would still be the same, you’d add that to the camera through Veo, unless you bought a camera that still has a plan left on it but that’s pretty uncommon anymore.

Some of the teams sell the camera with the tripod, like this one – https://soccerstripes.com/advert/june-2022-veo1-w-travel-case-23-ft-tripod/ . If the team isn’t selling their tripod you can find more on the tripod options in the tripod section of our Veo camera review.

We verify the ownership of the camera and check out their last game recorded before listing each camera for sale.

The other option for a high school season would be to rent a camera from a service like ours for 3 months. In terms of cost it includes the camera and the plan and you can create multiple teams if you need. For example Varsity, JV, Freshmen team, etc.

At that point it’s basically your camera to record as many games/practices as you’d like during the season. The coaches and players would be able to watch, download, clip the footage on their laptop, phone, or tablet from the Veo Editor.

You’d still need a tripod since shipping them can be expensive. We have ones we can rent or you can order one online.

We sell a “Veo Camera Rookie Guide” which shows you how to setup and use the camera and we include that as part of the rental. You can call or text anytime if you run into issues or questions. We have videos you can share with the coaching staff on how to use it for film review and also for players/parents on how to watch and create highlights. If that would help out you can reserve a Veo camera.

I didn’t cover livestreaming much in the discussions above because that adds additional costs. If you want to livestream you would need a Veo 2 since Veo 1 doesn’t support it. When you order you’d need to add the livestream plan, that adds about $40-50 a month to the plan costs.

You’d also need to have a hotspot or SIM card with a 50-100 GB data plan to stream with so there is an additional cost as well. So to livestream you’d either need to buy a Veo 2 or rent one from a service like ours.

The Veo 1 included the protective pelican case with the purchase. The Veo 2 makes it optional for $99. I would definitely recommend ordering the pelican case so factor that into the cost of the Veo 2. A used Veo 1 should include the pelican case, make sure to inquire about it if you buy used. The Veo 2 doesn’t fit in the Veo 1 case so it wouldn’t do teams any good to keep it but ask to be sure.

You probably should also figure in shipping costs for a used Veo 1. Most of the teams that list it ask the purchasing team to pay the shipping cost. If it’s just the camera that’s probably between $35 – 50. If it’s the camera plus tripod it would be considerably more. Unless you can find a local team and skip the shipping.

In terms of splitting costs it worked out for some teams to have the coach or booster program buy the camera but then have the school pay for the plan.

Having the women and men’s soccer team share the cost of the plan can help but it does add to the cost since often one plays in the Fall and the other in Spring. That changes the math because now you need the camera for about 6 months total but it’s over the whole school year. Having a Team plan for 12 months is just about the same cost has doing a month to month Team plan for 6 separate months (At the time of this writing. Pricing can change over time so double check). So in that case it probably makes the most sense to do an annual plan and then just split the cost between the two programs, that way you have access to it the whole year rather than just in season.

Last season we used a Veo to record home and away high school games. In some cases we put the tripod right on the sideline and elevated it all the way. In other cases we put it on a tripod at the top of the stands but only put the tripod at 6 feet. A few times we put the camera in the press box just on the ledge of the window.  Here are a few highlights from high school games.

If you have questions about the best way to record for your high school team you can email me ben@easysportsvideo.com or give me a call 816-398-8846.