In our initial Veo camera review we shared what we’d learned after about 50 outdoor games & practices recorded using the soccer camera. Now two months later and into the winter season we’ve used the soccer video camera for futsal training, futsal games, indoor soccer games, and even to record basketball games (tested it on a whim & the ai camera worked for basketball as well).

Here are a few lessons learned that we picked up last weekend that had nothing to do with the camera itself but more about how we use it. 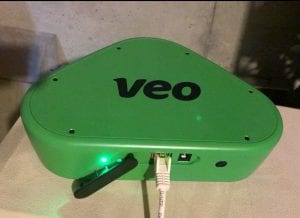 After uploading our futsal games from the previous weekend our camera was ready with an empty hard drive and a fully charged battery. We packed it into the case and I pulled it out the next Saturday morning to capture another weekend of soccer, except….

Apparently after unplugging from the power and putting the camera into the case last Sunday night I forgot to power it off. So when I opened it up the next time the battery was dead. This was pretty unfortunate because our boys futsal team went down 3-0 to an older team in the first half. In the 2nd half they fought their way back to a 4-3 victory and none of it was captured on film. This was the first game I missed recording for the Fall/Winter season since getting our Veo camera and of course it was an exciting one.

So the lessons learned from this game are:

Power Down
Before putting the camera back into it’s case make sure you press and hold the button on the back for a few seconds. The green light will change to a blinking red light while the camera powers off and turn off altogether once it’s shut down.

Check the Battery
On the way out of the house turn on the camera and check the battery level before you leave for the game. This will save you getting to the field to discover you have a dead camera.

Bring a Charger
We actually have an external charger that we bring along on busy tournament weekends but it was sitting in our garage. If I’d have checked the battery before leaving we could have been charging the camera on the 30 minute drive to the game. It’s also a good idea to get an extra power cord so you can keep it in your car or just plugged into your external charger.

Since we’re in indoor season you might think power would be an easier problem to solve since there are outlets indoors. If you realize the camera is dead and you brought along a power cord you could charge it during the warmups. However, you can’t record while the camera is charging. I’m not sure why this is but I’ve reached out to support to see if that will change at some point in the future. 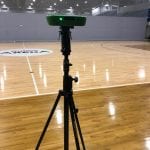 We got the Veo camera all charged up that night and ready to record another futsal game the next day. Now that we’re playing futsal there’s a lot less space to put up a camera on a tripod on the sideline. Since the court is much smaller than a full soccer field that means we don’t need to be as elevated to capture the action.

So what I’ve been doing is finding something like a pole, shelf, table, bleacher or something that’s about at half field and simply placing the camera on it rather than using a tripod. Since the camera has a low profile and a flat surface it’s easy to just set down and hit record. Since we play at lots of different indoor facilities and they have varying policies on tripods for safety reasons this has been working for us.

On Saturday I got the camera right about half court, up off the ground about 5 feet, hit record, and forgot about the soccer camera until the game was over. Unfortunately when I went to watch it back that night I discovered that in the 2nd half another coach for the opposing club spent a portion of the game standing right in front of the camera and blocking the view.

Typically you only have coaches, players, and the ref on the sideline. This was a coach for the club whose team was playing on the same court after ours and he came over in the 2nd half to stand with and talk to the head coach.

At one point in the video you can even see him notice the camera, pick it up, turn it over to inspect it, and set it back down. Obviously this isn’t an issue in outdoor because the camera is up on a tall tripod, people know you’re recording the game. However, if you’re indoors in tight spaces and just setting it on the sideline and just forgetting about the camera until after the game (which is one benefit of the camera since there’s no panning/zooming required) this is definitely a lesson learned.

After our futsal game we headed to a different facility for an indoor game for my daughter’s team. I found a spot on the sideline about midfield and set it up on top of the plastic divider. I started the recording during warm ups and sat down in the bleachers and caught up with some team parents I hadn’t seen in a while.

Then about five minutes into the game my son borrowed my phone and quickly tugged my sleeve to point out the camera view in the Veo camera app. The camera was no longer recording the soccer field but instead was facing a wall and sitting on what looked to be a desk.

Turns out the facility manager had seen the flat green triangle sitting off to the side, thought it was someone’s WiFi hub, and brought it up the desk. Unfortunately right about then my daughter scored a goal and the camera was recording a wall rather than her taking a touch and putting it into the corner of the net.

I tracked down my camera and got it set back up to capture the rest of the game but my daughter was pretty bummed that we’d missed her goal. However, not knowing where the camera had gone to for a brief time made leads me to the next lesson learned.

Put Your Name & Number on the Camera

Until we “lost” our camera for a few minutes I foolishly hadn’t put our contact info anywhere on it. It’s a good idea to make sure your phone number and name are on the bottom of the camera so that folks can contact you in the event you do lose it. Also smart to put your contact info inside the camera case as well.

I’m also going to look into getting a Tile tag to put onto the bottom or top of the Veo camera. That won’t help you locate the camera if someone else takes it home but if you’re at a soccer complex it could help you find a camera that’s close by but missing.

I’m curious, how do you keep track of expensive video, camera, or recording equipment when you’re on the soccer field? Please share in the comments below. Thanks!