If a professional soccer player told your kid to work on their weak foot, would they do it? One lucky Tuesday night in September a few years back we skipped out of practice a bit early for an autograph session with MLS defender Chance Myers. His tip to my son, “work on your weak foot”.

Myers went on to play in 27 games that season for Sporting Kansas City. He started and played all game for each of the five playoff matches and put away his PK in the MLS Cup final against RSL to help Sporting KC win the MLS cup. So you’d think a kid would listen to advice from a player like that…

Getting a kid to work on their weak foot isn’t easy. Like many fundamental skills in sports it takes a lot of repetition to fine tune. As soccer legend Dennis Bergkamp describes in his “Stillness and Speed” book some 8 year olds enjoy that repetition of just working on their touch – but who are we kidding, most kids aren’t Dennis Bergkamp.

Those regular repeated touches are so important to building technical skills but for a lot of players they just aren’t much fun and the whole point of playing soccer when you’re a kid is to have fun.

In general youth players enjoy playing in a game over simply doing technical work. The ability to make technical training feel like a game makes it a lot easier to get kids to work on those fundamentals.  That’s why our experiments with the DribbleUp smart soccer ball have been so encouraging – our kids don’t even blink when the Left Foot Circuit or Left Foot Advanced playlist comes up on the screen! 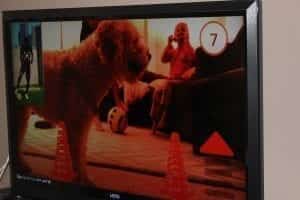 This latest session of DribbleUp took the game element to a new level.  The iPhone mirroring cable that I mentioned in the last post arrived and turned the footskills training into a night of family fun! As you can see from the picture, even the family dog got involved.

Obviously we shooed the dog away but the reason she was hanging around was that all my kids were in the living room doing DribbleUp. My two oldest would take turns hopping in and out of the playlists and the youngest just liked to be in the background so she could watch herself on TV.

It reminded me quite a bit of the scene when our kids play Wii sports – all huddled around the TV giving words of encouragement and waiting for their chance to jump in. We spent quite a while with the smart ball that night because the app kept the kids wanting more:

These were all things that kept the kids wanting to play for “just 5 more minutes”. As you can see in the pictures as they advanced up the levels the color of the ball tracker changes.

It starts off blue and once you get to the next level it turns purple. If you want green you have to earn enough points to level up.

Every time we’d advance to the next level a collective cheer would come from all the kids, pretty funny. 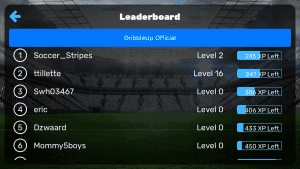 Adding the element of competition can be a good way to motivate people to work harder and it seems to work well for DribbleUp. My kids love checking the leaderboard to see how they were doing in relation to other players were training with the smart ball.

I’m not exactly sure what the logic is for positioning players on the leaderboard because you’ll see people with lower levels above users with higher achievement levels. It seems there’s some weight added for recent training which seems to make sense in terms of encouraging players to use it more often.

As you can see in the screenshot the user ttillette is on Level 16 but perhaps hasn’t used the app in a while so Soccer_Stripes user appears higher on the leaderboard. Once more players start using the smart ball and moving up the achievement levels I imagine the player ranking will make more sense. I honestly don’t care too much about the algorithm b/c what matters isn’t actually your spot on the list but that the leaderboard motivates my kids to work harder. The one thing to be careful of for the DribbleUp app is making the ranking rules too hard to understand because that could discourage players who don’t understand why they’re not moving up the leaderboard despite working hard at training. 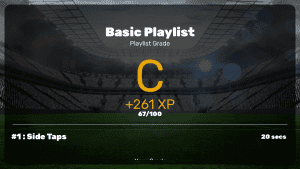 The app has a series of levels you can achieve based on how many points you earn from going through a playlist.  The number of points you earn is based on how well you perform your skills. As I mentioned before, each Playlist is broken down into multiple skills like “Side Taps”, “Ball Steps”, “Sole Flicks”, etc.

After you finish the playlist you’re given a score for how you performed each skill, A-F.  It’s actually been tough for my kids to get a high score. I talked to the folks at DribbleUp and the scoring right now is based on how a professional player would execute the move. This obviously makes it tough for a 9 year old to get an A because they won’t have the same technical expertise as a pro player. The plan is to add a multiple levels (like Easy, Medium, Hard) so a player can be tested based on their current level.

As you can see the number of points you earn is based on your overall playlist score. In this case they got a C which earned them 261 points.  We did have the bad luck of running into a bug with the Slapcut Squirt drill that earned us Negative Infinity points.  As you would expect that zeroed out their points so they were back to level 1. Needless to say they went to bed quite unhappy that night. Luckily they’ve gotten that bug fixed since then. 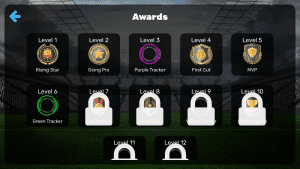 As you get more points and move up the levels you unlock Badges in the Awards section of the app. My son really like that part of it but so far it seems like it’s too easy to unlock levels. He was able to move from Level 2 to Level 6 in one night of training.

Granted we did spend quite a bit of time doing DribbleUp last night, probably more than the average user would spend in a typical footskills session.  It is cool how the color of the tracker changes as you move up levels, just a visual indication that you’re making progress.

It could be that the higher in levels you go, the more points you need to advance to the next level.  I haven’t really paid attention to that but it would make sense that the difficulty would increase as you move up. I do like the point system because even if you don’t get an A on a playlist you still get some credit for working at it. 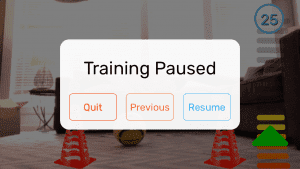 Our biggest complaint about the app is still that the tracking isn’t perfect. I talked to the DribbleUp team after our last session and they pointed out that the lighting can play a part in difficulties in tracking.

If you have a bright light in the background it can throw off the tracking so it’s not consistent. The majority of our time spent using the app has been inside and we do have a lamp in the background which could be causing some of our frustrations. You can usually tell if it’s going to be an issue for a playlist immediately after you scan the ball. If the virtual cones are quick to jump from green to red, or if they start red then you know the scan had an issue.

We learned that if you tap the screen there’s an option to Pause or Quit the playlist. So whenever we saw red cones right away we’d quit and re-scan the ball.

Other than that, the app has been fantastic! As we use it I’ve been sending notes to the team at DribbleUp and it’s been neat to see our feature suggestions and bug fixes start popping up in the app.

As the chill of winter approaches and Daylight Savings Time gets closer to stealing our light in the evenings after school I really think DribbleUp will got a lot of use in the cold winter months.