The Dribble Up app has 3 main ways you can improve your soccer skills: ball control, shooting, and juggling. We’ve done a soccer shooting app review so now it’s time for a look at the Dribble Up juggling feature. 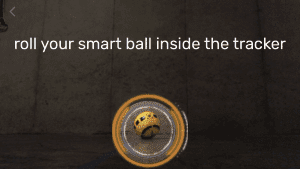 After you scan the ball you want to make sure you don’t stand too close to the device for a few reasons. The first is pretty simple, if you’re juggling really close to your phone or tablet and take a bad touch the ball could get away and knock over your device.

Another reason to stay at least a few feet back from the device is that getting the ball too close to the camera can cause it to count extra juggles, in our experience.

You’ll know once you’ve successfully scanned your ball because the juggle count shows up on your screen, starting with zero. At that point you can begin juggling and the counter goes up with your touches and the app will read out a count of how many times you’ve juggled the Dribble Up ball. 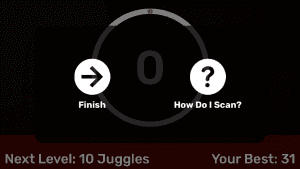 Once you lose control and the ball drops the counter goes back to zero but the app does show you the highest number of juggles you have that session and also how many juggles you need to reach the next juggling level. When you’re not juggling if you touch the screen you’ll see the option to “Finish” which will end your juggling session.

Our take on the smart ball juggling training is a little different then our thoughts on the smart ball foot skills. If you’re starting to learn basic foot skills then the Dribble Up app is great for teaching your feet the right movements. However, if you’re just learning how to juggle then you probably don’t want to jump right into the app to track your juggles.

The reason for this is that it’s easier to teach your brain and foot to do a Toe Tap or Foundation than it is to keep a moving soccer ball in the air. So if you’re a beginning juggler a really great way to start to train your brain and your feet on how to juggle is the “drop and catch” trick. 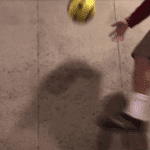 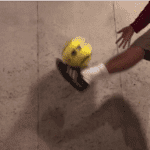 You drop the ball onto your strong foot, kick it up into the air, then catch it with your hands. Then you do the same for your weak foot and then alternate back to your strong foot. See how many times you can do this in a row without letting the ball hit the ground.

Once you get to 100, then try and juggle the ball back and forth between your left and right foot without catching it. You still might not be able to keep the ball up for a long time but it’s probably a little better than when you first started.

You can continue the “drop and catch” method and challenge yourself to see how many you can get in a row without dropping. Once you feel pretty confident then you can move on to the “bounce juggle”.

This requires more control than the drop and catch but isn’t as tricky as straight up juggling. With bounce juggling you drop the ball on your strong foot and kick it up in the air. Let it bounce once, then kick it back up into the air with your weak foot. So you’re not having to be as precise as juggling the ball the whole time in the air but now you’re adding in the practice of moving your feet and body in between each juggle to prepare yourself for the next juggle.

The whole reason to progressively work on your juggling is that starting cold can be frustrating. We don’t want players getting frustrated and giving up because they’re not having success with their juggles. You can use these methods with a Dribble Up ball but don’t have the app running because the drop/catch or bounce juggling will simply confuse it.

Tracking Juggling Improvement
If you’re able to juggle a little bit and want to get better the Dribble Up ball can be a fun way to measure your progress. See how many juggles you can get with the app running and then work on the bounce juggle method described above for a while without the smart ball app. After you’ve trained for a while juggle with the app again and chances are you’ll see your score improved.

Right now it doesn’t track your juggle count over time like it does for footwork but that feature will surely come in future releases. That ability to see your training history is one of the features that a lot of players love about the smart ball and the app will be even better once it tracks your juggle history as well.

Juggle Contests
Once you’ve improved your juggling to the point that you can consistently keep the ball up over time then the app becomes a fun way to compete against your friends. Once a juggle tracking leaderboard is added the juggling feature will be a good way to run a juggle-off or a juggle-a-thon for your team or club.

So, in summary. If you’re wanting to learn how to juggle I wouldn’t use the app to track your juggles right away because that could be frustrating. Instead use the methods described above to get comfortable with juggling and as you improve you can start using the app to challenge yourself and your friends.

Another good time to use the juggling app is when training is canceled for weather and you want to get touches on the ball but you can’t get outside. Just be sure to clear the counters and tables of fragile items before you start your juggling!