The Dribble Up soccer app really helped our kids improve their technical footwork over the summer. One of the reasons it made a difference is that they went through playlists in the smart ball app every day. Those consistent touches on the ball really helped develop their muscle memory so the motions of standard fakes and feints were more natural.

Of course it takes some discipline to do technical footwork training every day consistently in the summer. One of the questions we get from some soccer families is how do players get into the habit of regular technical training? Some kids who are really passionate about the game and about getting better will just do it on their own but of course every player is different.

How to Motivate Kids to Train Regularly?

For every one youth soccer player you know that goes out and trains on their own you probably know a few more who might need some reminding or urging to get in their regular training. We tried several things over the summer to see what could help motivate regular training. One thing that was pretty successful was our soccer skills contest but it was a lot of work to setup and run. 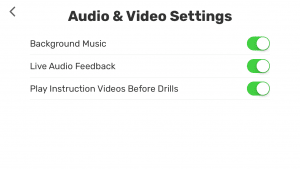 One thing that was simple but effective was the use of a song playlist to go along with their Dribble Up soccer playlist. Inside the Dribble Up app under Settings there’s sub menu called “Audio & Video Settings”. Inside that section you can toggle off the Background Music that plays while your kid is going through the drills.

The music that comes with the smart ball app is good to have when they’re going through the drills, it can get them fired up. However, something we found what works even better (at least for our daughter) is turning off the music and instead playing her own music playlist.

Over time she’s created a “pump up” playlist that she likes to listen to before games. We have it setup as a Spotify playlist and we discovered that she also really enjoys listening to it while she works on her foot skills with DribbleUp. Listening to that playlist kind of gets her “into the zone” so she doesn’t even think about the fact she’s getting in lots of reps on the ball. When she’s listening her adrenaline is pumping and the energy level is high.

Here are some of the songs on her playlist:

Obviously her playlist has a lot of “girl power” and it might not work for an 11 year old boy but that’s fine. Every kid has their own pre-game music that gets them going. If they can listen to that when they’re doing Dribble Up playlists or any other technical soccer drills at home then they’re more likely to do it.

Not only is your player more likely to be motivated to work on their skills but once they get into a groove they’re probably more likely to work on it for longer because their music gets them “in the flow”. For that reason it’s good to have a longer list of songs setup, 12-14 could work well for younger kids. 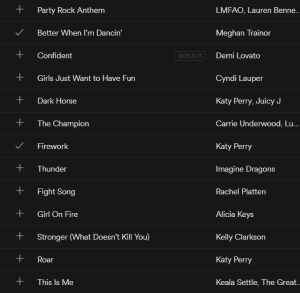 They probably won’t go through all of them each time, if they’re doing a ball workout that lasts 10 minutes and they have 12 songs that are 2-4 minutes each then they’ll only get through some each day. If you put the songs on shuffle then they’ll have a good mix of music over time. Having them play in a random order keeps it fresh and prevents them from associating a certain song with a specific part of the workout.

Over time you can create multiple playlists with different “moods”. For example this one is my daughter’s “go to” list of pump up songs but she has other playlists she can listen to depending on how she’s feeling. Music can be a powerful mental tool. Even if she doesn’t feel like training if we put one of these playlists on Alexa it can help prepare her to break out the boots.

So if you’re looking for a way to motivate your player to train more often or for longer stretches or even just to help mix up their training routine you can try putting their footskills to a playlist.