Do Dribble Up Soccer Drills Help in a Game?

Do Dribble Up Soccer Drills Help in a Game?

Last week we held our first Soccer Tech Expo where players and teams got the chance to try out various soccer technologies like the Dribble Up smart ball. One fun thing about the event was that we got to answer a lot of questions from parents and players about how we use soccer tech for skill development.

One family stopped by on the way to a tournament match and the dad was asking how the drills in the Dribble Up app would help his son in a game. I asked him what position his son played and he said mostly mid-field. We went through some of the drills and showed him how his kid could use certain moves in a game.

To help illustrate how players can use what they practice with the Dribble Up ball in a soccer game I pulled in some game footage from recent matches just to give an idea of how the drills can be helpful.

In the video, watch player #12, also playing in the middle of the field.

In the first clip in the video you can see him use the left foot to spin the ball away from the defender, keeping his body between the ball and his opponent.

The drill in the app gets you ready for this by practicing bouncing on the ball of your right foot and pulling the ball to the side with the sole of your left foot. 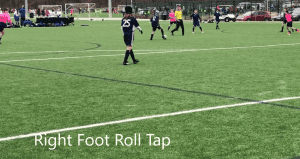 After he spins way from his opponent then you see him use the outside of his right foot to create some separation from the defender. He actually makes this touch a little too heavy, looks like he needs to work on this drill more! It gets you a lot of reps pushing that ball with the outside of your foot.

About 10 seconds later #12 gets the ball back and again uses the outside of the right foot to setup a shot on goal. The shot itself isn’t hard enough because his body position isn’t right when he strikes the ball.

The shooting feature of the Dribble Up app will be released in the coming months, looks like #12 could use that once it’s released.

Right Foot Inside Outside 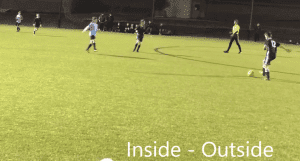 These fast touches allow the team to quickly move the ball across the width of the field and play it into space into a dangerous scoring position.

The next 2 clips don’t point out a specific drill but they do highlight something that’s important to note. If you watch the next 45 seconds of the video you’ll notice that every player only touches the ball once or twice before moving it onto the next person on their team.

Even though it’s called Dribble Up the smart ball can help with other parts of your game. The ball moves a lot faster when it’s being passed rather than dribbled and speed of play is really important to playing at a high level.

Rondos are great for first touch but you won’t practice any of them with Dribble Up. However touches you put in with DribbleUp make you more comfortable on the ball and will eventually make it easier to play those 1 and 2 touch passes.

The last clip has a few more foot skills shown by #13. Starting out with a little V pull when he first gets the ball. The V taps drill gets you lots of reps for that move. The player doesn’t use it as a fake as much as to create space between himself and the defender so he can face him up.

Of course working on your technique in a calm and controlled environment is different than when you’re in a game with your adrenaline pumping, wind or rain blowing, and defenders running at you. There’s no training substitute for actually playing the game. However, what training tools like the smart ball or other programs can help you with is getting in reps on those moves so you build up muscle memory. So when that defender is sprinting at you full speed you don’t have to think heavily about the technique of doing an evasive move. Instead your brain tells your feet and off you go and leave the defender in the dust.

Hopefully that helps explain a little bit how the drills in the smart ball app can help a player improve on the field. If this was helpful we can do more drill/game demos in the future.