If you’re a soccer parent, team, or soccer club who rented a Veo camera to record a soccer game for tactical analysis, soccer video highlights, or just to try out the ai soccer camera these are instructions on how to use your camera.

After you complete your reservation we’ll send you an invoice for the equipment deposit 2 days before we ship out your camera. Once we have your deposit we’ll ship you the camera and send you the tracking information. You can follow the progress of the camera here – https://www.ups.com/track

We require a signature for delivery so make sure someone is around to sign for it when the camera is delivered.

You’ll use the same box to return the camera so take care when opening the package so that it can be used for return shipping.

Before the camera arrives we’ll send you a form to complete where you specify the team(s) you’ll be recording and the email address(es) that need access to the recordings. We’ll set you up with access so you can see the soccer game videos once they’re uploaded.

This video shows you how to get your camera ready when it first arrives:

Be sure to go through these steps as soon as you get your Veo camera so you’re ready to record soccer video clips and footage. Just like your players practice to get ready for their match, this is your practice to get ready for recording the soccer game. Since you only have the soccer camera for a limited time you want to make sure you’re prepared for the games you record. You never know, there could be a goal in the first few minutes!

Be sure to watch this video once it arrives and call us with any questions – https://www.youtube.com/watch?v=R7L_MjqGV-E 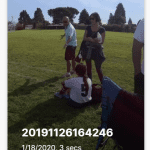 Please do not wait until the day of the event you’re recording to watch the video and go through the steps.

We highly recommend using the camera to record a training session before using it for an actual game so you get a feel for how it works and can resolve any issues you have prior to the event you’re recording.

Here is an example of a game that was intended to be recorded by one of the teams that rented the camera but as you can see from the screenshot the duration of the video was only 3 seconds long. It’s very disappointing when you think you’re capturing a game but discover later you’ve captured none or only a portion of the event. Taking the time to walk through recording a game or practice prior to one you want a video of is a good way to avoid that situation.

Start recording during warmups so you can be sure to work through any issues and don’t miss the start of the game.

Record with the sun behind the camera if possible.

Be aware of the facility rules. Some complexes won’t allow recording stands over six feet, in which case you won’t be able to extend your tripod to its full height. Some facilities won’t allow you to record on the side of the field, you have behind a certain point like a sidewalk or fence. It’s good to know the rules and follow them. Otherwise officials may approach you right before the game or during the game and you’ll miss part of the match while you move the camera.

The 2nd part of this video (4:21 in) shows you how to upload your video and know once the videos are done uploading

You’ll receive an email invite. Create your password and you’ll be able to login to app.veo.co once the games are uploaded.

Once you’re done recording your games secure your camera in the case and put it in the box it was shipped to you in.

Make sure the case contains:

It’s really easy to forget to detach the Quick release plate from your tripod so please be sure to remove it and include it in the case. Take the box to your closest UPS store. In some cases you’ll ship the camera back to us and in some cases you’ll ship it on to another team that will be using it next. We’ll let you know which address to ship it to ahead of time.