The PLAYR SmartCoach system is the big brother to the PlayerTek soccer tracking GPS and smart vest. Both from Catapult Sports, the PLAYR SmartCoach tracker helps answer the question many serious soccer families are asking these days. How much soccer is too much?

While PlayerTek helps you benchmark and watch the performance of your player over time, the PLAYR SmartCoach wearable GPS tracker goes further and gives your player feedback on how much and how hard they’re training and playing. With kids going from ODP regional events, to National League or ECNL matches, to futsal games, and then speed and agility training you wonder at what point is it too much wear and tear on their bodies?

The SmartPod is the GPS tracking unit and is worn in the back of the SmartVest. Getting the sizing right is important when choosing which size of SmartVest you need, below is a sizing guide for the Smartvest.

Here is a sizing guide for the Smartvest, measure the length around the biggest part of the player’s chest and use the guide to choose. If a player is in between two sizes PLAYR recommends choosing the smaller one because a tight fit is preferred over a loose fit. 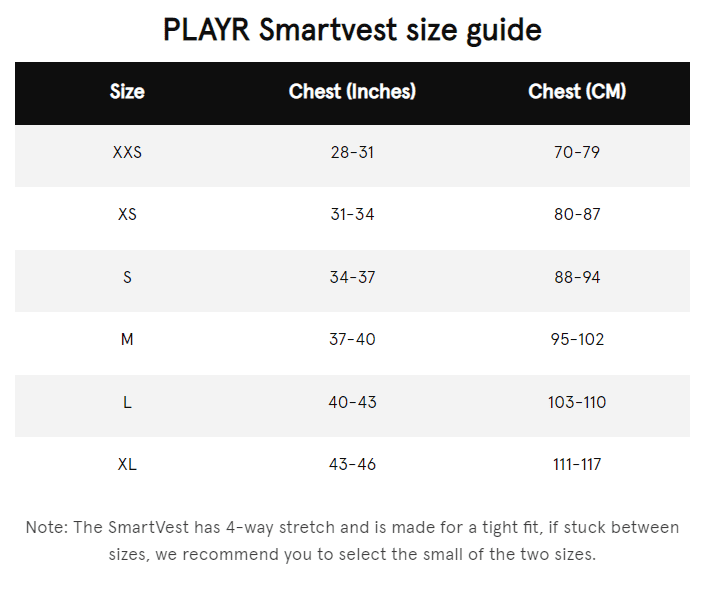 Important: Please be sure to measure the player before ordering the PLAYR tracker to make sure they get the right fit.

Based on our customer service chats with Catapult typically players 11 and up can wear the Smartvest and tracking system if they meet the size requirements. The sizing guide above is for wearing the vest under the jersey. The Smartvest can also be worn over the shirt as well in training but not in games.

It’s not advisable to get a vest size that a player will “grow into”, Catapult recommends a tight fit so a loose vest doesn’t shift and bother a player in the middle of play.  You can purchase the PLAYR vest separately from the tracker so a player can get a new vest and continue to use the same SmartPod as they grow.

Current data protection laws are written so that players under the age of 13 aren’t allowed to use the app even with parent consent. This means if your player is younger than 13 then when you create the player profile in the app you’ll have to enter an age of at least 13 to be able to continue. If your player is 16 or younger they’ll need parent/guardian permission to download/use the PLAYR app.

The SmartPod tracker doesn’t need a phone around to work, it activates when the device is dropped into the vest. There’s a mangetised strip in the vest that turns the tracker on when you slide it into the vest and turns it off when you remove the device. This means it doesn’t work with the PlayerTek vests, it has to be used with the PLAYR vest.

Why PLAYR?
Catapult Sports also makes the OptimEye tracker that professional teams use to monitor their athletes. The PLAYR SmartCoach uses the expertise that Catapult has developed for pros and makes it available to soccer families. The OptimEye player tracking system is designed for teams and sports scientists but the PLAYR tracking system is built to give feedback to individual players.

Passionate soccer players have a hard time saying no to invites to guest play or to more opportunities to play soccer. Wearing the PLAYR tracker gives you an idea of how all those training sessions and games add up and the SmartCoach app uses artificial intelligence to give players feedback on all the hours they’re logging on the pitch.

Your player slides the SmartPod into the back of the Smartvest, typically worn under their jersey. When the SmartPod is in place the tracking is activated. Once the game or training session is over the player takes off the vest and removes the tracking device. At that point the SmartCoach app on your phone syncs with the GPS device via Bluetooth.

One thing to note, your phone doesn’t need to be nearby or turned on for the tracking to occur.  The SmartPod will capture the data without the phone, then later on you can open the SmartCoach app and sync the data.

We bring this up because one hassle of the Zepp soccer alternative is that you need the phone there and the app open to begin the tracking. After the training session or game is over you have to manually tell the device to stop. In addition, you have to be in range of the Zepp tracker to start the tracking. This wasn’t as big a deal when they played 9v9 but once they move to 11v11 if they were on the opposite side of the field you couldn’t start the tracking. Something else that happened is that the player would wear the tracker but then in the rush to get to the field and start the game we’d forget to start it and capture the data.

There is no charge to use the SmartCoach app, it’s a free download from the App Store or Google Play. You do need to create an account in order to pair your soccer tracking GPS to the app.

Looking back through the version history in the App Store the releases are a mix of new features and bug fixes. Based on the history PLAYR makes regular updates so they’re pretty responsive to user feedback which is good to see. App updates are free of charge as well.

A common question asked by families with multiple kids is whether they need to get a separate tracker for each player or whether they can share one. The answer really depends on whether the players will both be using it during the same season.

You pair the SmartPod to your iPhone app when you first set it up so all the performance data is linked to a certain PLAYR account. If you wanted to share the device between multiple kids you’d need to unpair and re-pair the soccer tracker each time a different kid used it. So you can share it but it’s not convenient. Also, if your players are much different ages/sizes you’d want to get the appropriate sized vest for each one.

Battery & Charging
The SmartPod will last for about 5 hours of tracking use. When it’s not in the vest it goes into standby mode, the battery can last around 2 months in standby mode. When we used other soccer trackers, like Zepp Play Soccer, remembering to charge the tracker was one of the biggest challenges.

One thing to keep in mind is that the device automatically turns on when you slide it into the PLAYR vest which is a nice convenience but you also have to remember to remove it from the vest when you’re done using it. If your player takes off the vest but leaves the SmartPod inside the device won’t shut off and after about 5 hours will run out of battery.

Once the charge is completely empty it takes about 2 hours to completely recharge the lithium-ion battery. The SmartPod charges wirelessly while sitting on the charging dock. If you have a portable power supply you could always plug the charging dock into a USB port.

It’s best to charge it the night before a game but if you forget you could always plug it in the car on the way. If the game is 20-30 away and you usually get there 30 minutes before it starts you could probably put on enough of a charge to get in a game – however Catapult does recommend fully recharging it before use once the battery is dead.

The PLAYR SmartPod contains multiple sensors in addition to the GPS that capture a lot of data about your soccer player.  According to Catapult it stores about 1250 data points per second including: 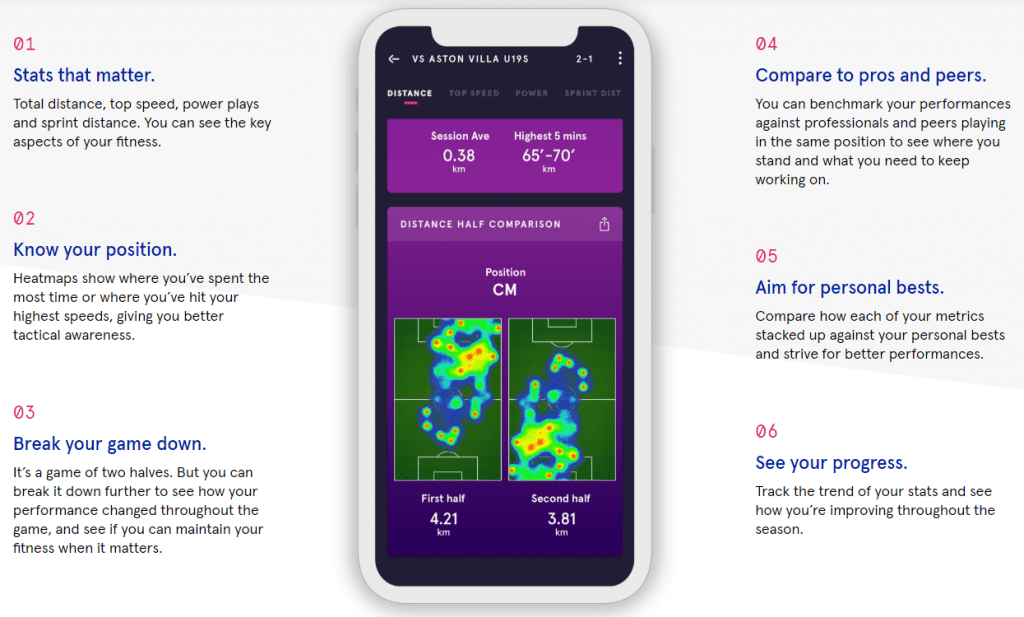 The SmartPod contains a global positioning unit. The position update rate of the device is 10HZ, which means it updates about ten times a second. According to Catapult this lets the device measure to the nearest 100cm, which is how they’re able to generate a pretty precise heatmap of the players movements.

One of the things that makes PLAYR unique is that the app combines player data with sports science best practices. It analyses your data from a game or training session and gives personalized advice to the player to help with preparation, performance, nutrition, and recovery.

Given the custom nature of the advice the app offers Catapult recommends syncing the device with the app right after a match or practice so it can provide up to date recovery information.

All that data requires a lot of storage, the SmartPod can store up to 4 GB worth of data on the device. Once your tracker is full you can contact Catapult and they’ll help clear up space. When we asked Catapult how long it takes to fill up the device they told us that it depends on how often a player is using it but they haven’t had a customer use up all the storage since they’ve started shipping the wearable GPS.

The PLAYR SmartCoach system does not track heart rate. The SmartPod is worn on the back and is not a heart rate monitor.

FIFA has a Technology Innovation Department that is creating a standard for electronic performance and tracking systems (EPTS). As part of that effort the 2017 – 2018 Laws of the Game were updated. In Law 4 a minimum standard for EPTS was created to apply to any wearable tracking system worn in a game.

The PLAYR SmartCoach system went through the necessary tests for safety, quality, durability, and comfort and qualified to meet the FIFA requirements for International Match Standards for the tracking system.

No Indoor Use – The PLAYR GPS system can only be used outside since it needs to be able to get a GPS signal. Don’t plan on using the PLAYR tracker inside because it won’t work.

Do Not Wash – The good news is that the SmartPod device has a waterproof rating of IPX6 which means you’ll be able to wear it in the rainiest of practices or games. However, if you submerge the tracker underwater or run it through the washing machine it will ruin the device and it will no longer work.  This site, Catapult, and other vendors will not replace the unit if you wash it so please remember to always take the tracking device out of the vest before washing or it will be an expensive load of laundry.

When we first started researching the PLAYR system we contacted Catapult to ask them about the differences between PlayerTek and PLAYR. This was their response:

“PLAYR is our more advanced product and tracks all of the same metrics as PlayerTek such as top speed, distance covered etc, as well as all new metrics such as Power Movements (explosive moments like accelerations), Session Load (how much you have worked) and Intensity (how hard you have worked).

However, the main change is the addition of the new AI SmartCoach, which uses your calendar, schedule, statistics and previously recorded data to give you professional sports science tips such as when, how hard and how long to train for as well as giving you tips for improving your game.”

PlayerTek Upgrade – If your player currently uses PlayerTek and you’d like to buy PLAYR SmartCoach you can log into the PLAYR account with your player’s PlayerTek login. This way you don’t need to create a new account and all their previous data should be pulled across.