While impatiently awaiting the delivery of the smart soccer ball that we supported on Kickstarter last week I did more research on what I’m hopeful will be a pretty cool soccer innovation.

If you’ve never supported a product on Kickstarter, one of the bummers is that you have to wait several weeks for the project to get it’s funding. During that time the creators typically spread the word about their new product to help attract early adopters.

There was decent coverage of the new smart ball online but after a while the articles seemed to start repeating some of the same details:

The possibilities for the ball and training would float around in the back of my head on my jog or on my commute. I took notes of my questions as they came up and one day I finally got in touch with the folks at Dribble Up.

I sent them a pretty big list of questions so I finally ended up just getting on the phone with some of the team and learning a lot about the ball and more about the future of DribbleUp.

One of the main things I was interested in was the ball itself. I was concerned I might buy an early prototype of the ball that would be quickly obsolete when they came out with a newer version. What I learned was that the ball itself wouldn’t be changing, it was the app and that would constantly be upgraded.

From what I understand, there’s a unique pattern embedded in the surface of the ball, that’s what makes it “app enabled”.  Your iOS or Android version of the Dribble Up app uses that pattern to track the ball as it moves.  That’s why you hold the ball up to be scanned before you start playing.

Adidas also has a smart ball called the miCoach Smart Soccer Ball that needs to be set on a charging station regularly and uses a Bluetooth connection.  The DribbleUp ball doesn’t need to be charged and doesn’t need Bluetooth. The augmented reality function in the app is what is used to track the ball. 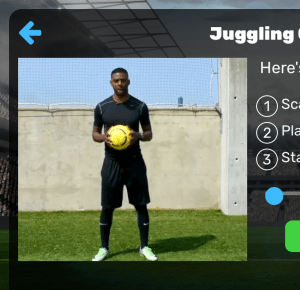 I mentioned this app to my son after I initially saw it and one of his first questions was who the virtual trainer was. His name is Yannick Salmon, he played for Jamaica’s international youth teams and professionally in Finland.

It’s interesting the difference in my take on this versus my son’s. I think it’s great that they have a professional player doing the demos but you don’t need Messi for an app like this. The idea behind DribbleUp is to focus in on the fundamentals and to encourage technical repition. You don’t need Ronaldo showing you how to do toe-taps, what players need is a reason to do them – every day.

How Many Balls & Users?

I was also curious about the interaction between the ball and the app. Turns out you can use any DribbleUp soccer ball with the same app, it’s not like the one specific ball is paired with the app.

The other question I had was whether my son and daughter could each have their own DribbleUp profile on one iPhone or iPad. Neither of them are old enough to have their own phone (they would disagree) so they’ll be using my phone. Turns out they can both use the same app on my phone and just login with their individual user.

What Kind of Drills? 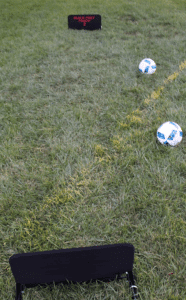 Another question I had was what different drills came with the app? I sent them a photo of a setup we were using for working on turns.

Basically two rebounders setup opposite each other. You play the ball off one rebounder, turn and play it off the opposite one and repeat for a period of time.

I was wondering if we could we setup the virtual cones to the location of the two rebounders? Then we could measure how long it takes the ball to go from one to the other and see how long the turns are taking. We could track the progress of the quickness of the turns over time.

It sounded like that kind of thing is a more custom case and although it might be possible at some point down the road – at first you can’t upload your own drills. The initial library of drills did seem like a good start and had a mix of basic ones and a progression up to more difficult drills. 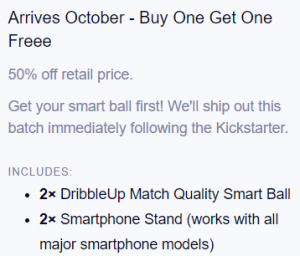 I spent quite a while on the phone talking about these various aspects of the smart ball.  The call checked off a lot of questions and concerns I had about the ball and I was also impressed that the product team was willing to spend so long discussing it with me. Made me think that they were pretty committed to getting it right which I thought was a good sign.

After the call my level of excitement about the DribbleUp ball was even higher so I went into Kickstarter and changed my pledge to the BOGO offer so I could get two of the balls rather than just one.

At this point the Kickstarter is already doing well in it’s funding. It has more than its $10,000 goal pledged so it’ll be funded.  With Kickstarter, if the product doesn’t get enough backers to raise the minimum amount of money then everyone who’s contributed gets their money back and creators don’t have the capital to pursue the idea.  In this case the ball has already been created – the team is raising the money to pay for the first big product run. They still have about a week till the Kickstarter ends, now I just have to figure out if we can get our DribbleUp balls early!