The second stop on our 2021 Veo camera tour was in Miami, Florida. Despite a slight tournament cancellation setback the team was able to get a few games recorded.

The second stop on our 2021 Veo camera tour was in Miami, Florida. Despite a slight tournament cancellation setback the team was able to get a few games recorded. Looks like they have some speed, touch, and finishing down in Miami! Check out these sweet goals. I think my favorite is the first one in the clip with the cheeky pass and the nice controlled volley to finish it.

If you’d like our Veo camera to come to your town you can book a stop on the tour. 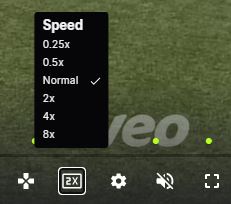 This week’s feature is the recently added ability to change the playback speed as you watch the soccer game.  If you watch the game at 8x speed with audio on it sounds like a bunch of Minions playing soccer! Seriously though, this feature is great for both speeding it up and slowing it down.

Often times during a match I’ll see something my son or daughter does and make a mental note to point it out to them in the game recording. Watching back through a whole match can take a while to find that one moment but using the speed control feature you can get through a game pretty quickly.

Honestly, after watching back a game at 2x speed I don’t think I ever need to watch video footage of a recorded game at normal speed again. Reviewing the game at 4x speed is a pretty good way to keep and eye on the play and look for specific things that unfold during the game. If you’re looking for a certain moment in a game then you can use the 8x speed.

The half and quarter speed are good for looking back at technique and pointing out potential improvements. For example, a particular shot on goal didn’t have much power behind it. I was able to show my daughter at .25x where her plant foot was and how that made a difference in her shot. Of course the slow speeds can also be good for checking if an call was accurate or not. It won’t help you after the fact but can make you feel better (or worse) about a call.

Its been a lot of fun seeing the highlights from all the games. You can see other cities on the Veo camera tour and let us know if you’d like a camera to visit your town.