The former World Cup champions, Germany, lost their first game of the 2018 World Cup to Mexico. The 1-0 loss was a big win for Mexico and a surprise to

The former World Cup champions, Germany, lost their first game of the 2018 World Cup to Mexico. The 1-0 loss was a big win for Mexico and a surprise to “Die Mannschaft” as the team is sometimes called by fans. Today in World Cup action Germany faces Sweden in must win match if they want to move onto the next round of play. Sweden is coming into the contest with a 1-0 win over South Korea. 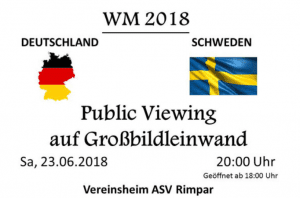 We have a special fondness for the German team, having lived in Germany for 4 years and absorbed the fussball culture that permeates the country. When we lived there I had a chance to play with a youth team at ASV Rimpar. Although my German was weak I was able to train and play with them and get to know the players some through the game. They had a neat tradition, after a home match all the players would get cleaned up and meet in the clubhouse for some food or a drink.

In fact ASV Rimpar is hosting a watch party today in the clubhouse for the Germany vs Sweden game. I imagine there are similar watch parties happening in almost every soccer club in every little town in Germany today. The expectations of the whole country are high for “Die Mannschaft” but the team is packed with talent so we’ll see if they can deliver on the hopes of their fans.

Today’s Dribble Up playlist is called the Die Mannschaft and features the following drills:

The World Cup Dribble Up foot skills contest for today is supported by International Champions Cup. The International Champions Cup brings together teams from top leagues to play over the summer in cities around the world, many of them in the US. For example, Manchester City vs Dortmund (Chicago), Juvenus vs FC Bayern (Philedelphia), Dortmund vs Beneficia (Pittsburgh), Liverpool vs Dortmund (Charlotte).

They also hold the International Champions Cup Skills Challenge in 12 different cities where youth players from U-12 to U-16 can come and show off their soccer skills. Players are put through a series of workouts in Dribbling, Shooting, Juggling, and Passing.

They’re scored on their performance in each of these areas and they compete against the scores of other players in their city for a chance to win tickets to one of the Champions Cup games.

Today in Dallas and Minneapolis the Skills Challenge is open to players from U12 – U16 age groups to come compete.