South America and Europe are the powerhouse continents when it comes to international football. Five of the eight teams who made it

South America and Europe are the powerhouse continents when it comes to international football. Five of the eight teams who made it to the quarter-finals of the World Cup are from Europe, six if you count Russia. While part of Russia lies in Asia and part in Europe if you look at the Russian clubs where the national team players compete the majority of them are in Moscow or St. Petersburg which are in the Eastern European portion of the country. The other two teams hail from South America (Brazil & Uruguay).

The trend was similar in the Round of 16. Ten teams from Europe and 4 from South America. Only Japan and Mexico weren’t from one of the “soccer continents”. If you’re a kid born on a continent that’s not South America or Europe and you have a dream to win the World Cup your odds aren’t as good. However, that doesn’t mean that someday you won’t lift the trophy. 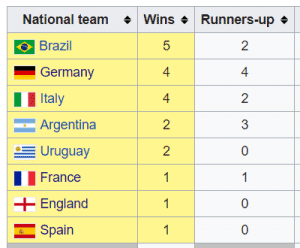 In fact, it means that if you’re not from South America or Europe and you can help your national team win the World Cup then that victory will be even sweeter since you beat the odds. A team outside of the “football continents” has never won the World Cup and with the current teams in the quarter-finals it won’t happen this go round.

The city and venue for the 2022 and 2026 World Cup are already set so if you’re from Asia, Africa, Australia, or North America and you have your heart set on playing and winning the final game in the World Cup you now have a visual of your goal.

Your work is cut out for you, your job is to beat history. As we’ve seen with Messi and Argentina, one amazing player can’t likely carry a national team to victory in this tournament. So it’s not just up to you. You and your buddies need to study, learn, and work hard and someday you might have a shot at the Cup!

Today’s Dribble Up World Cup contest is sponsored by Fountain City Futsal Academy. One of the things that’s helped create amazing Brazilian soccer players is the country’s love of futsal. If you travel to Brazil you’ll find futsal courts in many of the schools around the nation. You can find impressive YouTube videos of a young Neymar or young Coutinho slicing up the futsal court as they developed their dynamic styles playing futsal as kids.

In an effort to grow the game in the United States the U.S. Youth Futsal organization recently created the USYF Academy Program. The head coach of the U.S. Men’s National Futsal Team, Keith Tozer, will be the Technical Director for the new Futsal Academy. His goal is to help support local academies around the country in building a curriculum, training sessions, and leagues to help develop youth futsal players.

Fountain City Futsal is an academy based in Kansas City that’s one of the first futsal academies in the US. You can hear one of the academy coaches talk about his country’s passion for futsal and his strong belief that the youth players in the US would greatly benefit from embracing it as well in this youth futsal video.

The Fountain City Futsal Academy is a supplement to a player’s competitive club, they train 11 months of the year on futsal specific techniques and tactics and players compete in a futsal league over the winter months and participate in the USYF regional tournament to try and qualify for the youth futsal national championship.