How can you use the Dribble Up soccer ball for your team? There are a few ways a team can use the smart ball for training that don’t require every player to buy a smart ball. One of the ways is to have a Dribble Up station at team training that players can use to work on their foot skills.

How many times have you told players who are sitting out of a scrimmage to juggle on the sideline to get more touches? How many of them actually juggle and for how long? With Dribble Up you can get those kids wanting to work on their foot skills or their juggling and even keep track of it if you’d like.

Last week we had a 3v3 tournament for our team and ran Dribble Up soccer stations for the kids who weren’t on the field. Here are some lessons we learned when putting together the DribbleUp playlists that will make your session more effective.

1) Create Multiple Progressive Sets of Drills
We got a little carried away with the first playlist we created. It had 10 drills we thought were pretty fun but we figured out pretty quick on our first test that was a mistake.

When you’re introducing players to a new training tool it’s a good idea to ease them into it. The principles of coaching youth still apply – set them up for success and then build on that success as the session goes on.

So we changed our approach and created multiple playlists:

The Mini Messi only had 3 simple drills that pretty much all players have done and introduced them to using the ball. The Messi added another 2 drills which were a little more complicated and the Super Messi added an additional 3 drills that also increased complexity.

One thing we’re used to about coaching is that you can adjust your drills as you go depending on how the kids react. When you’re using technology like Dribble Up it’s harder to make those changes in the middle of the session so it’s best to prepare more options ahead of time.Along those lines we created another set of drills

We followed the same progressive approach where each playlist built on the previous one increasing the length and complexity but used different skills than the Messi playlists.

Turned out it was a good thing that we had a few variations because some of the players were struggling with the last drill in the Messi playlist so we switched over to the Ronaldo instead and they both scored better and enjoyed the playlist more.

2) Lead With the Strong Foot 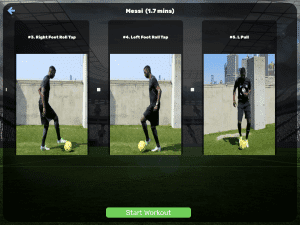 In the Dribble Up drill library you have some drills that use both the left and right foot in the same drill and others that have 2 variations. For example the “Left Foot Roll Tap” and the “Right Foot Roll Tap”.

Since most of our players have their right foot as their strongest foot we always led with the “Right Foot….” drill first. That way they got comfortable with the skill using the foot they’re most comfortable with and made it easier when they moved onto the “Left Foot…” drill.

Obviously not every player is right footed so how do you handle that? Right now DribbleUp has no way to indicate which foot is a player’s strong foot. I think it would be helpful if a player could indicate their strong foot in their player profile. That way in the playlist you could lead with “Strong Foot…” and follow it with “Weak Foot…” and the app would adjust based on the player.

3) Save After Adding Drills
As you’re building the playlist in the coaches dashboard be sure to save each drill after you add it. There were times when I went in and added a few drills and forgot to save them. If you go back and try to save after adding several drills you can run into issues in the dashboard.

Suggestions – Add the ability to easily re-order the drills in the playlist.

4) Do a Trial Run
When you introduce a new drill at practice you don’t always know how it’s going to work out. You can diagram it and plan how you’ll introduce/demonstrate it to the team but until you actually get out on the practice pitch you’re not sure how it’ll go over.

The nice thing about the Dribble Up playlist is that it’s not as complex as team training so you don’t need the whole team there to test it out. You can run one player through the drills to see how they handle them.

As I mentioned earlier we initially created just one longer playlist but after running my son through it I realized several mistakes I had made setting them up. Definitely do a trial run of your playlist when it’s easy to tweak it. Don’t wait until you’re at training to discover you need to change it.

Even if you’re not running the playlist at team training and you’re just assigning it for homework it’s good to do a trial run before pushing it out the team. 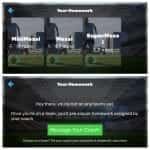 The DribbleUp app doesn’t need to be connected to the internet to use it but there are a few features that require connectivity to work.

For example, if you create a custom playlist and assign it to the team for homework the device needs to be connected to be able to access the homework.

A good test is to set your device to Airplane mode before you do your Trial run and make sure everything works as expected. If it doesn’t then you can

6) Disable Updates
After you do your trial run and get everything worked out it’s not a bad idea to turn off your updates until after you use Dribble Up at practice. For an iPhone you do this in Settings:

Our team session went great but then 2 days later I brought the Dribble Up stations to a coaches event to demo how we use them. In between there was a Dribble Up app update and the interface and a few other things changed. It was definitely an improvement but I wasn’t used to the new version of the app so it was trickier to show other folks how to use it. 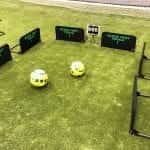 When players are working hard on these skills and doing changes of direction the ball eventually will get away from them and roll away. We had multiple stations setup so the players could compete and if you do this you’ll want to create zones so the ball isn’t rolling into the other players area and messing up their score.

One way to do it is to space them out or if you don’t have enough space you can separate them with bumpers. At first the players will ask what they’re for and why they need them but then once they get into the playlist and eventually lose control of the ball they see why it’s nice for their score to have their ball not rolling away and not have other balls rolling into their area.

8) Dribble Up is not Rest
When you take your US soccer coaching courses and plan out practices you allow for enough rest periods in between activities. Don’t treat a DribbleUp station as rest. After a player finishes a DribbleUp playlist they’re out of breath. Don’t make the playlist too long, 3 minutes maybe.

We’ve found that 20 seconds per drill has worked out pretty well. Allows them enough time to settle in and get a rhythm going but doesn’t wear them out.

By the end of our 3v3 tournament the kids who were sitting out opted out of the Dribble Up stations because they were worn out from the 3v3 and needed the break.

9) Have Enough Stations
The right number of stations will vary depending on how many kids you have at training and how you’re using it. We had 2 and it went pretty well, I’d say 2 – 4 would be a good number.

Having 3 stations would haven’t worked out with the way were running the competition but 4 would have worked since we could have let twice as many kids go at once. If you weren’t doing a contest and just having players go through the playlist then 3 would be great, or if you had 3 teams that wanted to go at once that would work as well.

10) Teach Players How to Use the App

There’s not a whole lot to using the app. Simply tap the playlist you want and scan the ball to start so it doesn’t take a long time to show them how.

If they’re waiting on you to scan the ball and start the playlist it slows down the flow so definitely make them self-sufficient on getting started once the player before them finished.

Next time we’ll do a write-up on the coaches dashboard and how you can create custom playlists and assign them to your players as homework. If you’re interested in having us come run a dribble up skills session we’d be happy to chat with you about a Dribble Off Challenge or a Dribble Off Soccer Party.