DribbleUp is coming out with a new feature called DribbleUp Live that lets you go through their soccer drills with an instructor. They let us demo the new smart ball app feature this week and it went pretty well. Update:  The DribbleUp Live feature is now available in the smart ball app. 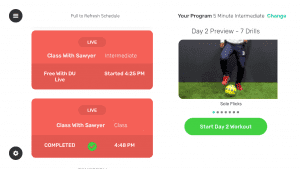 As you can see from the DribbleUp video demo below the new feature adds a new tile in the soccer ball app called “Live” that lets you sign up for a scheduled class. So basically you get a soccer skills training session along with the smart ball.

The soccer drills are ones from the DribbleUp library so if you already use the soccer app then you’re familiar with the moves he’s walking you through. Once the drill starts you have a certain amount of time to get in a certain number of touches based on the drill. 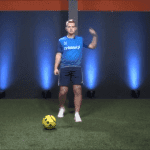 The video quality was great for us and I liked how he showed how to do the move and then motivated each player to work hard through the skills. At the end of the session the instructor stretches the player out a little while they waited for the leaderboard to show up. At this point it looks like the leaderboard shows how many touches each player put in. We were a little late joining so our rep count was a lot lower but we’re looking forward to jumping in on time next round.