The smart soccer ball from DribbleUp came onto my radar via Twitter today when I saw Tristan Tilllette share a video of his kids with the ball. I’m a sucker for innovative products and a soccer fan so the combination was too intriguing to pass up.

I scoured the details of the Kickstarter product page and the more I read the more exciting the idea sounded. It seems to have the potential to be a really awesome training tool and the fact that creators (Mark and Eric Forkosh) had already delivered a successful version of a smart basketball gave it more legs. 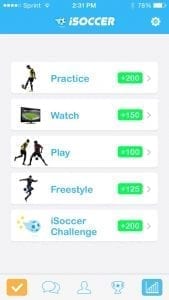 We’d used iSoccer in the past as a team and with my son individually and it was helpful but a few things about it weren’t ideal. Each drill was scored differently so the kid or parent had to understand the scoring of each drill and that was very inconsistent. Basically it made it hard for a player to do it on their own since they needed someone keeping track of their performance while they did the drill. It was also self-reporting so every time you did the drill someone had to enter in the scores.

We did use iSoccer at practice and run kids through the drills off to the side to get a baseline for their technical ability at the start of the season. You could tell which kids were active on it even if they didn’t enter their scores b/c their ability to maneuver the ball in training and games improved throughout the season. At on point soccer.com offered rewards for progressing through the levels but that program was eventually discontinued and interest in the app dwindled.

The reason I was first interested in iSoccer and why DribbleUp got my attention is that some kids are driven to get better on their own like these kids:

However many kids don’t have that same level of determination and drive. If I go out with my kids they’ll play all night and work on their foot skills with me – but if I’m inside and suggest they go out and work on their turns they just give me a look and quietly disappear to play Legos or read a book.

I get it, just working on footwork isn’t particularly exciting for most players. I love when I can get my kids into a Beast Mode workout but they definitely have to be in the right mood.

I know what things my kids need to work on to improve but I want them to have fun while doing it – that’s the challenge for many parents and coaches. Some of the best teachers design lessons that help kids learn valuable skills without even realizing it. Some of my favorite coaches come up with drills that the kids see as just fun games but they’re actually learning important fundamentals of soccer.

Finding that balance between getting them on the ball and making sure they see it as fun (not a chore) isn’t easy. That’s why I was really hopeful when I first read about DribbleUp.

Making it a Game 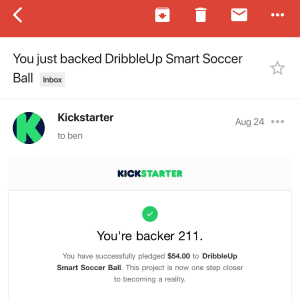 My kids are part of the iPad generation, they love anything that has to do with an app or a game so I had a feeling they’d take to DribbleUp right away. Not only are they mesmerized by the digital realm but they also love “earning points” so I figured the gamification of training would be right up their alley.

That’s why I put in my Kickstarter order, looks like I’m supporter #211.